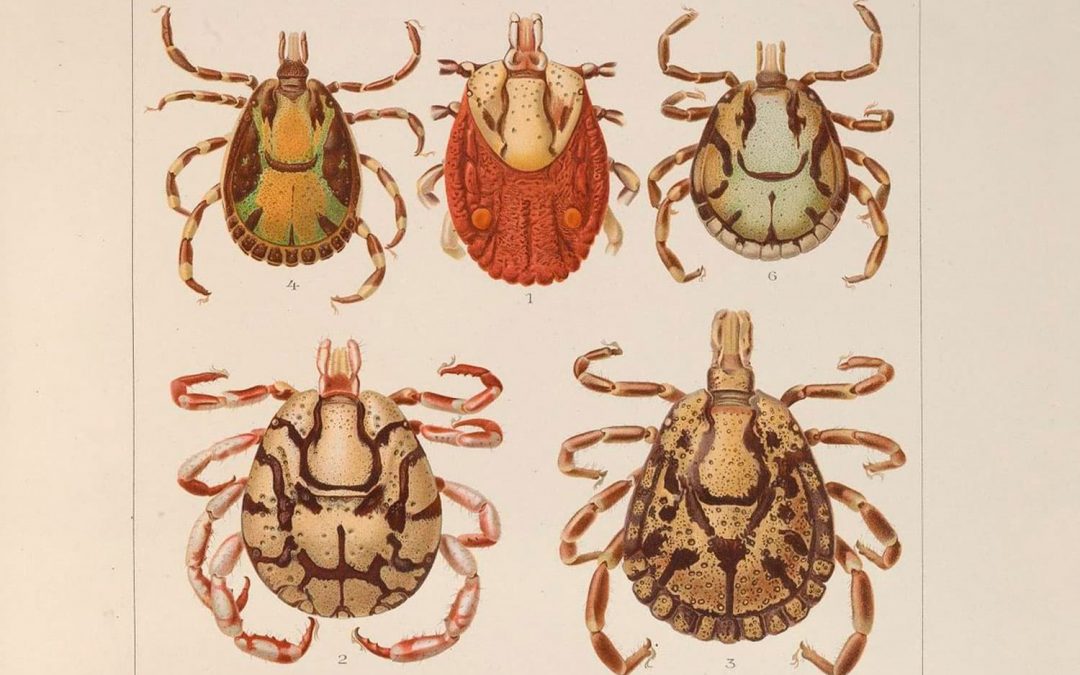 My morning walk is a quest to enjoy the wild side of my neighborhood. Unlike some creatures I don’t really have a goal; I just like the serendipity, like a coyote crossing the road ahead.

But lately in my yard I’ve become the quest – for food by a very different kind of “canine,” the American dog tick.

Alas, it’s tick season, and May is Lyme Disease Awareness Month. The black-legged/deer tick (Ixodes scapularis) is the vector-culprit. Luckily, my run-ins have been with American dog ticks (Amblyomma americanum) but they can carry the bacteria for Rocky Mountain spotted fever and tularemia. The lone star tick (Dermacentor variabilis) has reached Wisconsin; it can produce a severe food allergy to red meat. All good reasons to know who is attached to you. 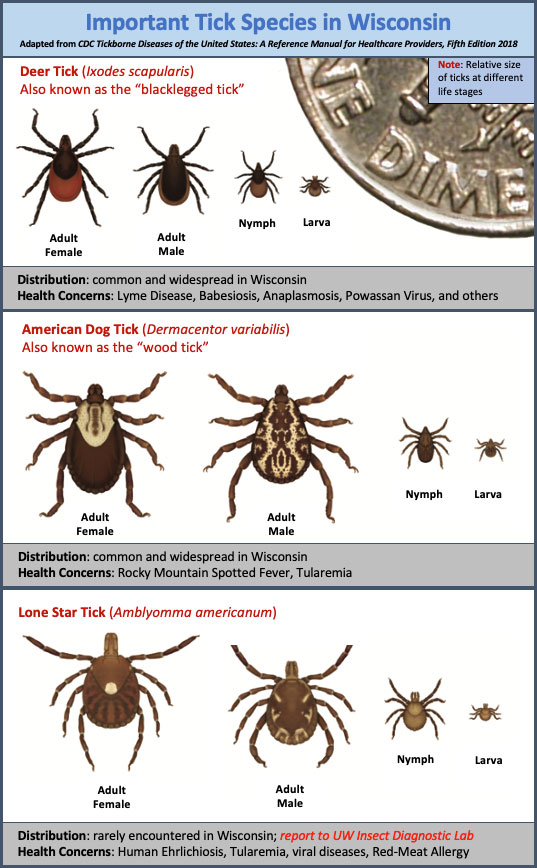 The problem with ticks is they often include us as a free meal in their four-staged life cycle. It starts with a blood-sucking mother who lays a thousand+ teeny eggs during spring-summer. Temperature, rainfall and humidity are factors on rate of development which could take 2 years. Once hatched, the tiny seed-ticks (6-legged Stage 2 nymphs) need a blood meal from any warm-blooded creature but they could go hundreds of days without a host (that sounds like they are invited to feed on you). Fortunately, they can’t fly, jump or run, but they can climb up plants where they wait in a “questing” posture with first pair of legs out ready to climb on the next carbon dioxide expelling host.

To become a Lyme-disease carrier the tick needs to pick up the pathogen from the reservoir host, a white-footed mouse. If the tick only feeds on a raccoon, deer or squirrel before you then you won’t get the Lyme pathogen. But you won’t know, will you, who was ahead of you in the blood queue.

A tick could feed 3 days before it drops off for Stage 3, molting into an 8-legged nymph. Another quest for a 3rd host, often deer. More blood. Drop off, molt into Stage 4 adult. Then it’s a quest for a mate and then a quest for another blood-host to gear up for egg-laying. And you thought your life was complicated.

It takes time, waiting in their passive quest for a host to pass within reach. And humans can be a host at any stage. So, it’s important to know what the different stages of the 3 species look like so you don’t overlook them as you do a body search in a quest for ticks.

The best tactic is to avoid being a blood meal. Lyme-disease is just one of several pathogens that could be transmitted by deer ticks. Always keep a pair of super thin needle-nosed tweezers handy and use them to lift the tick up. (Avoid pinching or squeezing the tick so it doesn’t spit its juices into your body.)

It can be hard to appreciate that ticks have a place in the ecosystem: chickens, turkeys, pheasants, opossums even some snakes eat them. Better yet, snakes eat mice, so a healthy snake population is a good sign for tick control. But the diseases ticks carry keep other creatures’ populations under control too.

If you pull a tick off, put it in a small container, label with date and pop in freezer as rashes don’t always occur immediately. That way you have the culprit for identification.

Things could get worse: over the past 20 years the black-legged/deer tick’s range has more than doubled, in part due to white-tailed deer expansion. Mild winters means less die-off. And hotter, more humid summers is like an extended picnic for ticks in general.