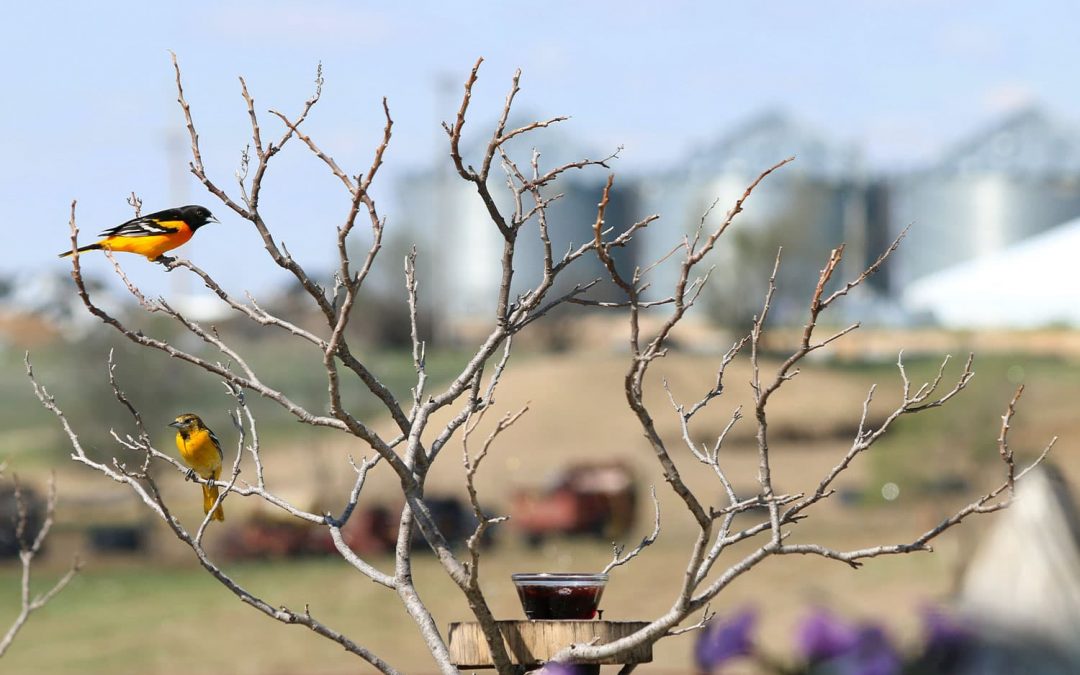 Spring is here! Although March 20th was the vernal equinox, May 1st is the half way point to the summer solstice; the Sun has had time to warm up the soil enough for plants to spring back to life in their annual performance.

Culturally, this day recognizes laborers and workers, and a call for 8-hour work days. Naturally, the unsung wild laborers include pollinators along with birds that take on the role of insect pest control during the summer, working from dawn to dark, without pay. (Sadly for honeybees, their honey wages are stolen.)

Just after midnight May 1st, as a tempest raged eastward, an estimated 311 million birds were migrating into Illinois and Wisconsin and all parts east. The insect-eating warblers, wood thrushes, orioles, and ruby-throated hummingbirds are arriving after wintering in Central and South America.

A wild play is taking place simultaneously on “stages” across the planet. Players from South America are now showing up for summer family productions here. This live-action, every-day drama involves weather, plants, insects, birds. Obviously, Sun brings the star power. But weather is the wild card – sometimes in Sun’s face, sometimes weeping out of control, or glaring without a tear for a full season or longer. Scenery dictates where the action takes place. The roles of the players (insects, birds, and other wildlife) are fixed, but the interactions are more like improv. Sometimes the insects (who are very picky) enter late if their favorite plant isn’t ready. Worse is when there’s an exotic substitute and they become no-shows. Birds always sing their long-memorized parts of their duet, but will they be answered this year? What if the partner has gone missing? The chorus loses its power to perform. Or not be heard at all. All players try to adjust without direction.

Do they even get the same memo? The human audience is often clueless to changes in the stories being played out, but many take critical notes. These fall into the hands of scientists who look for patterns of when things are supposed to happen, or who showed up or is missing. Hopefully, these can be cue cards for next year. But the unseen director is climate and no one can argue against it. The plants and animals react as best they can.

And the best we can do is take a crash-course in scenery. Then we would learn that woodland spring wildflowers appear before tree leaves close off sunlight to the forest floor. And that early flowering bloodroot, toothwort, Dutchman’s breeches, Jacob’s ladder, violets are needed to get the show going for the insects in Act One. We’d be ready for Act Two with mayapple, trout lily, meadow rue, hepatica, Solomon seals, wild ginger, columbine, trilliums, spiderworts. For Act Three we’d have lined up the summer bloomers: milkweed, mints, and certainly the Aster family. For Act Four we’d have the winter shrubs in place with their berries. Something for every seasonal act to go on.

What we the audience see as “weeds” (dandelions, chickweed, creeping Charlie) might be the only available much-needed nectar and pollen especially for the emerging support players of bumblebees and butterflies in Act One. Center Stage is every park, refuge, yard, road right-of-way where the wild players carry on with their life stories whether seen or not, including space to rest, to eat and raise their families, and to prepare for winter season.

Life is full of stories. Some are familiar, a hummingbird returning to a feeder (awesome when you really think about what took place in its last 12 months, and how many miles it had flown to make its appearance.) Many are like previews: in one hour 23 different birds made their appearance along and in Nippersink Creek, including 15 returning for the summer season.

In As You Like It, Shakespeare points out, “All the world’s a stage, and all the men and women merely players…”

Since I enjoy the scenery, I’ve volunteered to take the role of gardener with this thought to guide me, “Let no one say and say it to your shame, that all was beauty here until you came.”

May Day needs to remain in full production; not to be shut down with that most desperate call for help.