Getting to Know Who 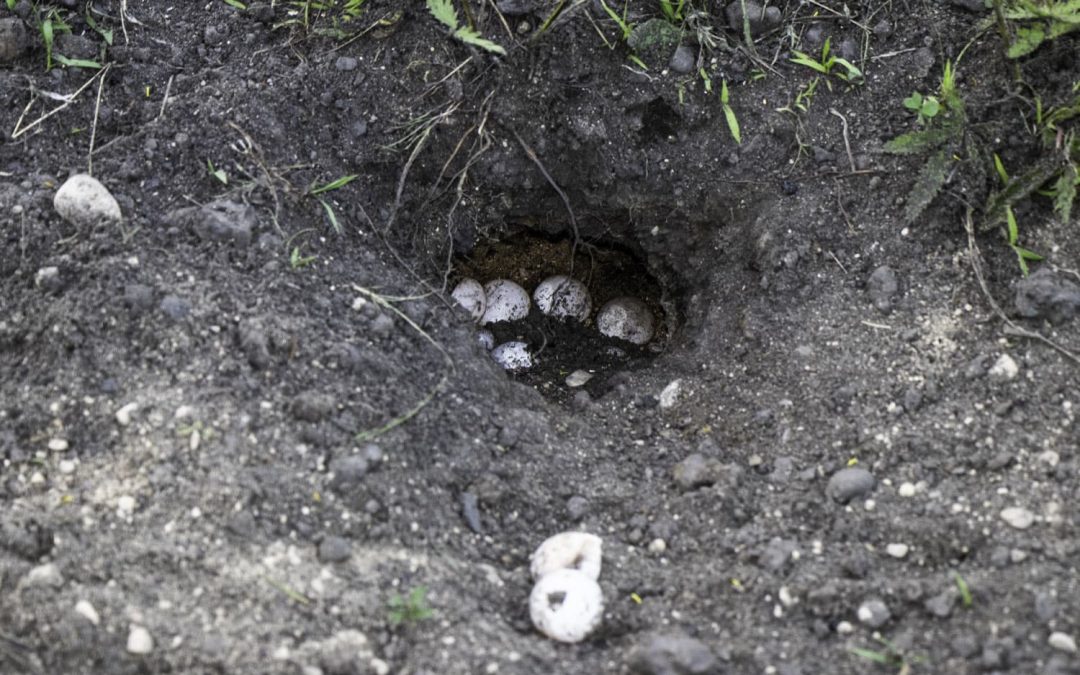 Turtle nest, disturbed by a predator

Oh, June, nothing like summer time to embrace wonder about Whos – who nibbled on a newly planted flower? Who was growling-huffing loudly in the night? Who dug a hole in the garden? (And given the different sizes there may be many Whos).

This is the month when turtles dig nests in the ground to bury (and incubate) their eggs. And even though we have a house to raise our young we still claim uninhabited outside spaces as well, i.e., garden beds, sides of hills or paths, dirt driveways – diggable real estate. (Keep in mind that the hatched babies may home-in to that spot next year.) Many eggs will be dug up by other Whos – raccoons and skunks. [Hmmm, did June 3rd National Egg Day include all types of eggs: insects, frogs, reptiles, birds?]

But Who else digs your garden? Ants, ground nesting bees and wasps. Earthworms and emerging beetle larvae. Squirrels and chipmunks. Tread lightly! There’s a lively Whoville in your yard.

Overhead, chittering, flying “cigars” who fly with their mouths wide open, are catching a myriad of insects in the air. Hopefully, you acknowledged their efforts on International Swift Day (June 7th).

Pollinator Week starts June 19th and while we think of bees, there are other pollinators who are also doing the work: bumblebees, flies (the 2nd largest group), butterflies by day, moths by night along with some bats. Beetles were on the job long before bees, pollinating the large saucer flowers of magnolias (FYI – the oldest flowering plants!). Even mosquitoes and rabbits were listed on Wisconsin Pollinator’s website – who knew!
June 13th was National Pigeon Day – and for those who ask “why”, pigeons have been one of our camp-followers for thousands of years. Pigeons, who are in the Dove family, share that tree with the extinct dodo (you can see the family resemblance in the babies).

Today we can easily identify many of the Whos in our yard with apps, or by asking Siri and Alexa who think they know everything. But I more fascinated about who did the actual work of figuring out who is who and what they do? Who was the first to wonder enough to sit and watch started long ago, and others who added their observations and compared notes? My library includes the culmination of centuries of real field work. And yet, we don’t know everything.

We, humans like answers, so we tend to create some kind of order out of the wild and woolly natural world. In school we were taught how to place animals and plants into their respective groups. Before apps we used keys.
It comes in handy every day as I find or hear a new Who. The recent uprising of UFOs from my compost pile turned out to be fungus flies. Blue eggs on the ground (one robin, one bluebird). A teeny tiny spider in the house (still not sure). Internet searches side-step the wonder in discovery: of slowing down and taking a closer look at those who live among us as well as ponder how we are connected. We’ve only scratched the surface when it comes to who’s in the ocean, or the microbes in our gut, or in a speck of dust.

Perhaps we need a reminder about how important the Whos are, and take a lesson from Horton in Whoville:
“I’ve never heard tell
Of a small speck of dust that is able to yell.
So you know what I think? …Why, I think that there must
Be someone on top of that small speck of dust.
….
So call a big meeting. Get everyone out.
Make every Who holler! Make every Who shout!